One of my very very favourite ceramists is British Dylan Bowen - his forms and slip decoration display a wild and free spirit which warms the soul.

In the words of David Whiting
(Author of Modern British Potters and their Studios) - "Dylan Bowen makes slipware really quite unlike any other produced today. There is a rhythmical attack, a flow of gestural energy that conjures up some of the most vibrant traditions of 17th and 18th century decorated earthenware. Yet it has a force that also reflects some of the more vigorous and minimal expressions of 20th century abstraction - particularly American - in painting and ceramics. He also cites outsider art and music as influences. His fresh and original combinations of colour on big platters and plates, the particular nature of these creamy surfaces on free, expansively thrown and press moulded forms, take the art of slip somewhere new and exhilarating."2006 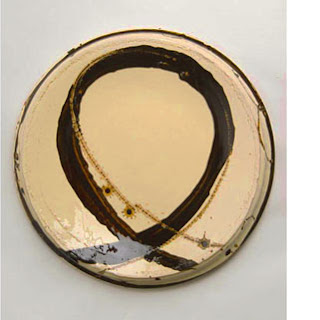 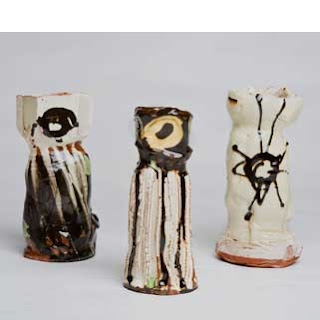 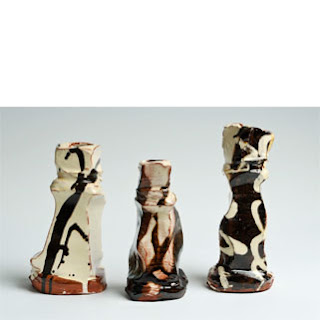 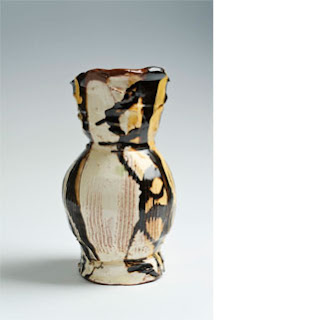 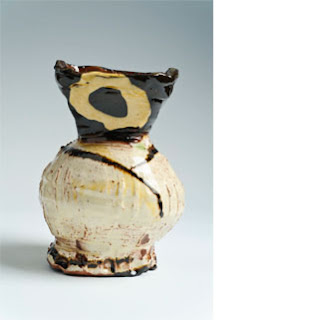 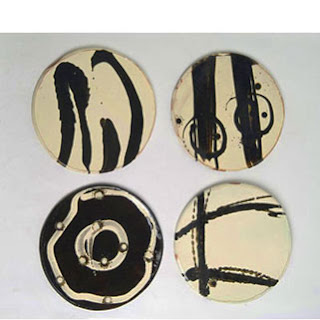 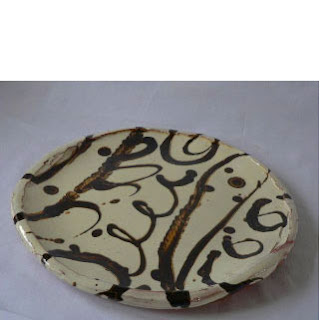 Posted by Clementina van der Walt at 6:44 AM 1 comment: 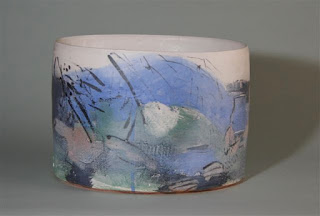 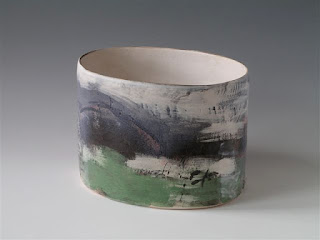 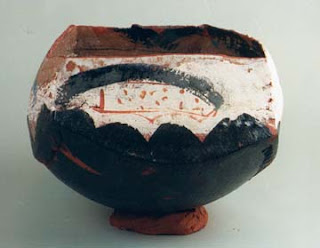 I seem to  be on a role with posting free brushstoke on ceramic surfaces...I find it incredibly exciting..the combination of a limited 3d form holding within it bold expressionist paint marks and textures.
And so by chance I came across the website of the Dutch ceramist, Petri Voet. The images posted here are admittedly from several years ago, and since Petri seems to produce a somewhat diverse range of work, I am not sure if this direction is still being pursued. I found the description of her work on her website rather inspiring and mysterious: 'Much of the work of Petri Foot contain her memories of distant travels. The open-minded viewer can travel on his own imaginative conception. Swivel the horizon around a bowl reveals new horizons loom on. '
Posted by Clementina van der Walt at 9:43 AM 1 comment: 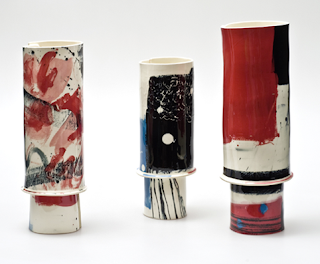 Capricciopitcher and mugs
Earthenware with engobe painting. Height of the mugs: 10 cm, height of the pitcher: 27 cm.
Photo: Michael Wurzbach.

I absolutely love the work of Elke Sada. I have some of her cups at home and drinking tea from them is like viewing an abstract painting each time. Using mainly very simple shapes, Elke then treats the surface as a full three-dimensional canvas with loads of bright colour and pattern. A complete delight!
(Some of these images above are from the Art Aurea website which displays all sorts of wonderful things)
Posted by Clementina van der Walt at 7:48 AM No comments:

Whoever thought ceramics could not be valuable...read this:

''Would you fork out £17million for this bowl?

At a glance this plain bowl could be mistaken for something you would use to heat up your beans in the microwave without a second thought.
But the simple light blue glaze with fine crackling and indents in the rim resembling a flower tell the expert observer that this is actually a 900-year-old Chinese dish.
And after a fierce bidding war between eight desperate buyers, it sold for £17million at auction in Hong Kong, smashing the record for Chinese Song dynasty ceramics sold at auction
Sotheby's said that it took just 15 minutes for the rare Ruyao bowl to sell for triple the estimate.
Several records have been set recently for elaborate vases from the Ming and Qing dynasties. 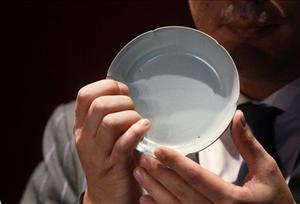 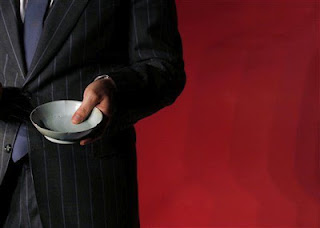 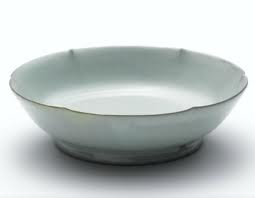 But the Song dynasty is even older, ruling in China between 960 and 1279, which makes it all the more desirable.
The dynasty was the first government to issue regular paper money in the country.
Ru ceramics are named after  one of five large kilns that operated at the time and are the rarest in China.
It surpassed the previous record set in April 2008 for Song dynasty ceramics, when a vase sold by Sotheby's went for £5.5million.
The auction house said the delicate bowl was sold by a private Japanese collector and was 'arguably the most desirable piece of Ru official ware remaining in private hands'.
Nicolas Chow of Sotheby's Asia, added: 'It is a piece of Ruyao which is probably the most fabled type of Chinese ceramic ever to have been created.'
Newly wealthy Chinese collectors have driven the prices of ceramics and antiquities to astonishing levels in recent years.
Many are on a mission to 'repatriate' their country's looted and sold heritage to the land of its origin.''
Posted by Clementina van der Walt at 2:31 AM No comments: 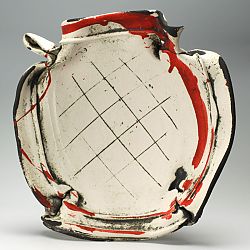 Yesterday after I posted work of Barry Stedman, Andre Hess commented that Barry  had been a protege of John Higgins. I am a great admirer of John's work which has that wonderful sense of freedom of making and enjoyment of letting go with the clay, the textures, and some wild decoration.
John's work is available at Ceramics Online which features some of the most exciting British contemporary ceramics. 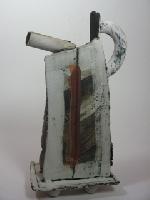 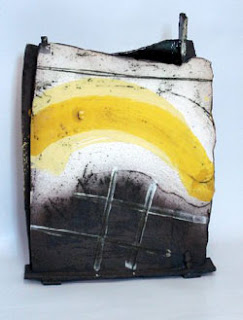 Posted by Clementina van der Walt at 1:24 AM No comments: 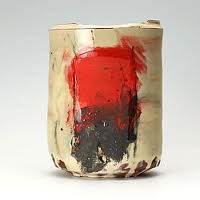 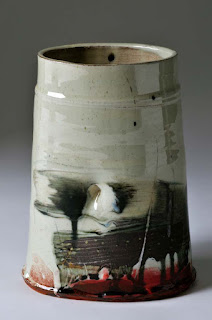 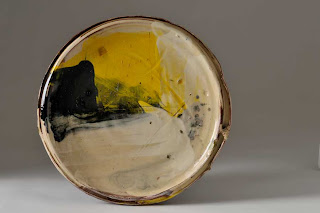 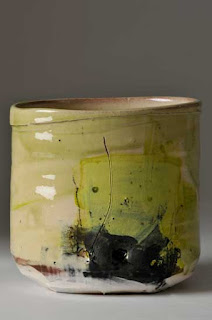 I think it was Peter Voulkos  - pioneer of Abstract Expressionism in the US in the 60's -who was once quoted as saying that the art of being expressive consists of sensing at which point to stop... Barry Stedman is a British ceramist who treats his pots as canvases with an extraordinary ability to combine the texture of the clay, the 3-dimensional presence of the vessel and the colours, brushstrokes and mark-making in a totally satisfying and inspiring way.
I purchased a plate from him last year at Ceramic Art London and it never ceases to provide contemplation and pleasure!
Posted by Clementina van der Walt at 2:00 AM No comments:

Studio life is going on - hectically - finishing orders which have to be delivered before Easter. The work being made is pretty much what I usually do in the studio...always - still - exciting, challenging, disappointing, wonderful with all the facets that making ceramics invites.
In the meantime - I have been looking at the work of other makers whose ceramics I love and find inspiring. Previous post about Sylvia Zotta I found particularly exciting in her use of colour.
Today I am inspired by the freedom of form and surface treatment in the ceramics (shown here) of British ceramist, Ashley Howard.
He uses the clay in the way a dancer dances a dance - with ease and grace, complemented with spontaneous details of colour on the surface...aah what freedom, seemingly so simple and yet surely a result of many years of developing such skill and understanding of form and technique. 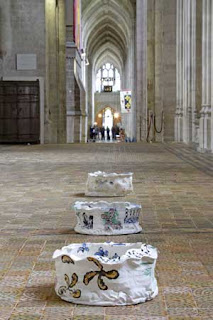 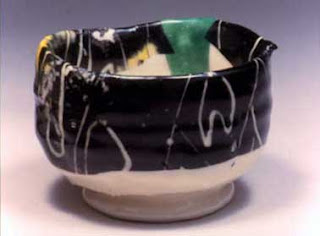 Posted by Clementina van der Walt at 12:06 PM No comments: