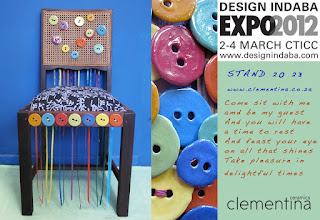 The buzz word right now is ...'upcycled'...and so please visit my stand no 2023 at The Design Indaba this coming weekend and see my contributions to this trend.
Then - with apologies to Christopher Marlow 1564-1593(Passionate Shepherd to His Love)- I thought it appropriate to pen this verse for the occasion...
Come sit with me and be my guest
And you will have a time to rest
And feast your eye on all that shines
Take pleasure in delightful times
Posted by Clementina van der Walt at 11:30 AM 1 comment: Links to this post

I have extracted this wonderful tribute to Emmanuel Cooper from the blogspot of Claudia Clare who has written so eloquently about this extraordinary man.
My own introduction to ceramics in the 1970's  included his book - A History of World Pottery - and since then I have been vastly informed by his writings as indeed have so many ceramists. I am also fortunate enough to have one of his mugs which I purchased directly from him a couple of years ago at Ceramic Art London and think of him whenever I drink from it.

Emmanuel Cooper, potter, writer, historian, teacher, friend and mentor, died on the 21st of January, 2012.  He was, and will remain, one of the central figures in British twentieth century ceramics. He was the alchemist who transformed studio pottery from its marginal position with of a handful posh English blokes making wholemeal brown stoneware and a sprinkling of precious pottery ladies pursuing a wholesome hobby in the garden shed, to the fully fledged, vibrant, professional craft that it now is, thriving in the art world and imposing itself on the reluctant consciousnesses of the literati and media-ristocracy.

In 1970, with Eileen Lewenstein, he founded Ceramic Review, which evolved into one of the most respected art magazines on the market with an international readership and profile. As a historian and glaze technician he was second to none. Go into the studio of any working potter and you will find at least one of his books, if not the dictionary of glaze recipes, then one of the histories. He did not restrict his research and writing to ceramics. His publications include: ‘Fully Exposed: Male Nude in Photography,’ (1995), ‘People’s Art: Working Class Art from 1750 to the Present Day,’ (1991), and, ‘The Sexual Perspective: Homosexuality and Art in the Last 100 Years in the West,’ (1994).  He brought this extensive knowledge to his writing and teaching. Under his influence ceramics became a discipline able to flourish in a contemporary art context. Without Emmanuel Cooper, we probably would not have either Grayson Perry or Edmund de Waal, at least not as we know them. Both, doubtless would be successful artists and de Waal, in particular, would still be a potter and writer but their work would have so much less meaning and resonance. Perry would not have his adversarial opposite which would deny his work much of it’s ‘charge,’ (his word), and de Waal, too would lack an opposing context – his would be a much lonelier body of work.

Cooper was born in 1938 and during his early years, during the post-war era, studio pottery, under the auspices of Bernard Leach, grew steadily. It become fashionable in the1960s when the quasi-rustic, back to nature aesthetic was part of an anti-establishment life-style. Numerous potters associations sprung up, sharing information and resources, each with its own newsletter, annual conference and exhibition. There was a corresponding growth in availability and quality of materials as the industry reached out to the burgeoning market of hobbyists. Classes mushroomed and potters acquired an increasingly professional training. In the midst of this maelstrom of activity, was Emmanuel Cooper who had that rare and extraordinary gift of being able to connect across the full range of makers and designers that emerged during this period. From the most conservative makers of garden and tableware, toiling in barns in the rural shires, to the most outré and rarefied of post modern academicians, producing dusty ‘installations,’ and museum ‘interventions,’ he inspired equal respect and affection in us all.

Cooper the potter was tenaciously 'urban.' He developed a range of glazes tailored to the needs of urban surroundings, in particular the use of a compact electric kiln. Not for him the roar, smoke and melodramatics of the wood-fired beasts beloved by rural potters. I will always think of Emmanuel Cooper pots as either bowls or jugs, but primarily as shapes which could show off his latest glaze like some kind of grand new apparel, a volcanic swathe of blistering, bubbling colour - usually a monochrome but rarely the same thing twice.  Delicate and elegant, they were and are instantly recognisable as his.
Emmanuel Cooper was true democrat, a unifier among the cliques and factions which so often proliferate in marginal subcultures. He diversified the discipline in all senses of the word, bringing together industry and studio, academics and makers, and above all, consistent with his egalitarian activist politics, he brought in people from all backgrounds ensuring that it could grow beyond the effete circle of posh blokes in sheds which characterised the early years, and become the highly respected art form it now is, one in which we can all be proud to participate. In a word, he is irreplaceable. In his case, the cliches are right: it is the end of an era and we  probably will not see his like again, but that does not need to be a reason to mourn. Rather we can celebrate his colossal legacy and build on it. There could be no better way to honour his extraordinary life and work. 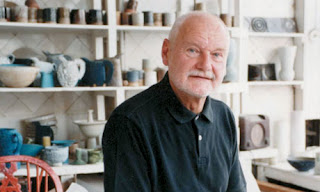 Emmanuel Cooper was an editor of acuity and humour. Photograph: Richard Smith/The Arts Council of England

See also obituary in the Guardian
Posted by Clementina van der Walt at 1:25 AM No comments: Links to this post 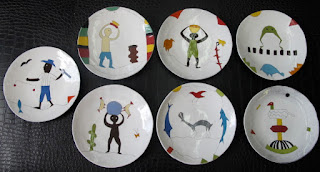 I have a commission to make a HUGE dinner service for a client before Easter ...so...in spite of a zillion other things happening...I have a slow, but steady making of this project. The dinner service will consist of 12 place settings , the side plates having a 'fantasy' narrative content (see image here) and the other items will be more simple with abstract detail. ..a fun commission!
Posted by Clementina van der Walt at 7:10 AM 1 comment: Links to this post

IZIKO Museums are hosting 'FIRED', an exhibition of South African Ceramics, at The Granary, Castle of Good Hope, Darling Street, Cape Town on 25 February at 10am. There will also be a display titled ’101 PLACE SETTINGS’ on show in the LADY ANNE BARNARD BANQUETING HALL

Ceramics or objects made of fired clay form an important part of the permanent collections of Iziko Museums. The exhibition showcases a selection of these rich and diverse ceramic holdings. The focus is on ceramics made in South Africa from earliest times through to the contemporary, including inspirational examples of ceramics from Asia and Europe. Indigenous southern African pottery was mainly collected during field trips and archaeological excavations. In addition, since the late 1980s, the ceramic collection of particularly the Social History Collections department, was expanded through the purchase of modern and contemporary South African ceramics. The exhibition reveals the beauty, and at the same time, the multi-layered meanings of ceramic works.

Posted by Clementina van der Walt at 8:56 AM No comments: Links to this post 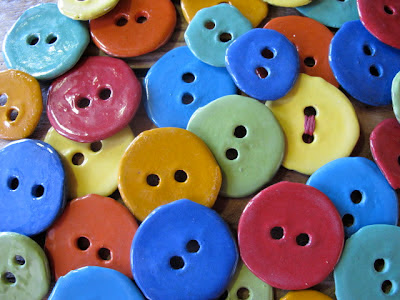 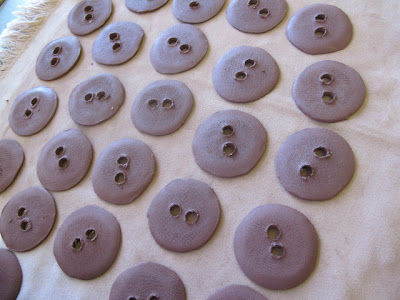 In progress - buttons, looking like biscuits - are ready for the kiln firing..

Not quite Gertrude Stein's somewhat avant-garde Tender Buttons but these ones will be ending up on a chair...and perhaps elsewhere too...Life is very creative and very busy right now..we are all in the studio working frantically making objects and props for the Design Indaba Expo happening on the first weekend of March.Hence minimal blogging right now...
Posted by Clementina van der Walt at 6:22 AM 1 comment: Links to this post 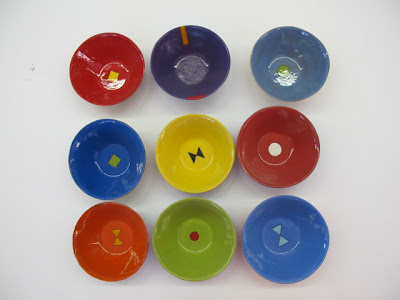 TO ALL GAUTENG REGION MEMBERS:

Every best wish for the new year.

Attached herewith is the formal Notice of meeting for the Gauteng Annual General Meeting due to be held on Saturday 11 February 2011 –
09:00 - approx. 14:00 at the Berario Recreation Centre cnr Dolores Ave & King Street Berario Johannesburg

A formal proposal for ratification will be put forward at the AGM for the following Regional name changes: Golden Reef to Gauteng South and Magalies to Gauteng North.

The presenter will be Clementina van der Walt of the Western Cape who will give a slide show and talk “To Buy or not to Buy” – the value of making and collecting studio ceramics in the 21st century.
Clementina is one of South Africa’s foremost ceramists, her innovative, distinctive work has been exhibited in South Africa, China, France, UK and Australia. She is one of the few South African potters to have been represented at SOFA in New York.
Clementina has a BA in History of Art, a National Diploma (Ceramics) and a National Higher Diploma (Ceramics). She has taken part in Ceramic Art London for the past seven years and has participated in CSA Regional and National exhibitions receiving an award at the 2010 National Exhibition. In 2011 her work was selected at the Gyeonggi Biennale in Korea.
She currently works from her studio in Woodstock, Cape Town and is the co-owner of a retail gallery shop at The Old Biscuit Mill in Cape Town.
For more info check out her website www.clementina.co.za or visit her blog www.clementinaceramics.blogspot.com

Interactive Discussion: to buy or not to buy - the value of making and collecting studio ceramics in the 21st century
This workshop is sure to create lively debate as many contentious and important issues are presented for discussion. The talk will be accompanied by a power point presentation illustrating relevant work by local and international ceramists. The presentation will begin with a brief overview of the historical origins and development of ceramics with particular reference to South African ceramics, the role of ceramics in our society and the need for collectors to purchase ceramics in order for this great tradition to survive.

Members do not need to bring lunch as Clementina’s workshop will be followed by a light finger snack lunch whilst they interact with her. Please note that the meeting will finish earlier than usual.

This is a wonderful opportunity to interact with fellow members and enjoy the benefits of an excellent workshop opportunity.

Booking is essential to facilitate catering: Please do so on or before 3rd February 2011 – tel.- 011 791 5153 – em: ceramicssa@icon.co.za.
Members requiring a proxy form for the meeting are requested to contact the Secretary on the contact details above. Thank you.

Posted by Clementina van der Walt at 12:07 PM No comments: Links to this post

The year is racing by - not much time to spend on social networking right now!However - first show of the year is a group exhibition at The Open Eye Gallery in Edinburgh Scotland from 30th Jan - 14th February 2012.Having worked quite intensively to get this off in time, I am on an even more hectic schedule making work for the Design Indaba expo here in Cape Town at the beginning of March.
Posted by Clementina van der Walt at 2:35 AM No comments: Links to this post